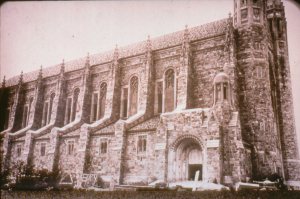 The building boom from 1880 to 1900 opened a new door in the chapter of material specifications. Steel rail producers and steam engine builders who began using Bessemer steel could no longer rely on craft experiences of centuries past. New technical expertise was required.

Several large steel producers in the United States attempted to implement their own ideas to produce better steel, but these efforts never made it into the marketplace. The added cost to produce better steel products was thought by the management of these large companies to not be worth the price of losing market share.  As a result, continued to produce large quantities and low prices, believing this was what the customers wanted. Not surprisingly, numerous quality problems with steel rails came to light though independent investigations into derailments. In fact, American steel rails were so poorly made that many railroad companies preferred British imports, which were far more expensive but much more reliable.

It was clear something had to be done. Some type of standard material specification was needed. Progress was nevertheless very slow in coming. Manufacturers in the construction industry objected to standards material specifications and testing because they feared that placing strict quality controls on products they produced could make customers more inclined to reject items and default on contracts. Material standards were thus not well received and remained very controversial.

In a creative effort to overcome antagonistic attitudes towards industry material standards, Charles Dudley, a research chemist working for the Pennsylvania Railroad, suggested the formation of working technical committees to discuss testing methods and approaches. He further suggested that decisions on standards be based on a consensus process. Dudley’s ideas were finally embraced and the American Society for Testing Materials (ASTM) was chartered in Philadelphia in 1902.  In its bylaws, ASTM dedicated itself to “the development and unification of standard methods of testing; the examination of technically important properties of materials of construction, and other materials of practical value, and also to the perfection of apparatus used for this purpose.”

This entry was posted on September 8, 2011, 7:33 pm and is filed under Uncategorized. You can follow any responses to this entry through RSS 2.0. You can leave a response, or trackback from your own site.