Posted by John Speweik in Uncategorized on October 21, 2011

Mortar analysis can be done various ways with several different approaches to identify the original mortar ingredients of a formulation. However, there are limitations and replacement mortar specifications should not be based solely on laboratory analysis. Analysis requires interpretation, and there are important factors which affect the condition and performance of the mortar that cannot be established through laboratory analysis. These may include: the original water content, rate of curing, weather conditions during original construction, the method of mixing and placing the mortar, and the cleanliness and condition of the sand (Pres. Brief 2 pg. 2).

Mortar can be evaluated by simple wet-chemistry of using hydrochloric acid and water to dissolve out the binder components (calcium carbonate) leaving only the sand particles behind. The ratio of binder to sand can be determined by drying the sample first then weighing it before and after the wet-chemistry process. The problem occurs when calcium carbonate is part of the sand component which would give you a false reading of the ratio. There is also x-ray diffraction, and petrographic analysis by microscope, as well as thin-section technology, where small samples of mortar are cut into very thin sections and dies are injected into the sample showing the different components of the mortar. In addition, ASTM C1324 is a test method to determine components of hardened mortar samples. 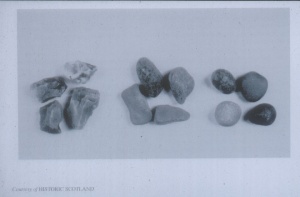 The most useful information that can come from a laboratory analysis is the identification of the sand by gradation and color. This allows the color and the texture of the mortar to be matched with some accuracy because sand is the largest ingredient by volume.

A simple non-technical evaluation of the masonry units and the mortar can provide information concerning the relative strength and permeability of each-critical factors in selecting the repointing mortar – while visual analysis of the historic mortar compared to the new replacement repointing mortar can be made. It’s important to match the un-weathered portions of the historic mortar in case the building will be cleaned in the future, or cleaning should be taken into account before the sample is matched.

Posted by John Speweik in Mortar on October 5, 2011 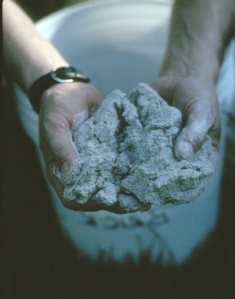 I often get asked this time of year, “How late in the construction season can we work with lime-sand mortars?” Well the quick and fast answer is 45 days before the first hard frost. Which means you should have your projects wrapping up by the end of October at the latest just to be safe. The reason for this safe period (as suggested by lime mortar manufacturers) is because of the way lime-sand mortars initially cure, by carbonation – absorbing CO2 back into the material through wetting and drying cycles. Most specifications call for a minimum of nine (9) wetting and drying cycles of misting the walls down with generous amounts of water after installation and allowing them to dry out naturally – drawing in the CO2 from the evaporation of the water. Obviously, this wet-curing process can become problematic during freezing temperatures.

The Brick Industry Association, March 1992, Technical Note 1 states, “Mortar which freezes is not as weather-resistant or as watertight as a mortar that has not been frozen.  Furthermore, significant reductions in compressive and bond strength may occur. Mortar having a water content over 6 to 8 percent of the total volume will experience disruptive expansive forces if frozen due to the increase in volume of water when it is converted to ice. Thus, the bond between the unit and the mortar may be damaged or destroyed.”

But what if your schedule backs you up against old man winter and you have no choice but to work into November? Don’t lose heart. We carried out some testing 8 years ago on a project in Chicago [Lime Mortars, Two Recent Case Studies, Ed A. Gerns and Joshua Freedland] to find out how late in the season you could repoint a building using lime-sand mortars. Trials were conducted at various times in the fall and early winter at approximately six week intervals. The last installation occurred 48 hours before the first frost on November 23, 2003. Observations during installation, following initial curing, and periodically through the winter and following year were noted. The high-calcium lime putty and sand mortar showed no signs of shrinkage cracks, the bond between the mortar and brick units was well-adhered, and no erosion or cyclic freeze-thaw damage was observed. We were working with butter joint brickwork of 1/8 inch mortar joints.

After 2 weeks, the depth of carbonation suggested that mortar cubes that were exposed to a freezing temperature for a limited duration during the first week had less depth of carbonation than the cubes that did not experience any freezing temperatures. After three weeks, however, this difference was no longer observable. All mortar cubes seemed to equalize after three weeks. Interesting. The success of this trial may be a result of the forgiving nature of lime-sand mortars, the low water content of the repointing mortar, and the narrow joint width of this particular project.

This paper was presented at the 2005 International Building Lime Symposium in Orlando, Florida. Proceedings are available on CD (ISBN 0-9767621-0-2).  The CD includes 39 papers by authors from 10 countries.  Also, included are several important historical documents related to building lime–some as old as 1920.

The conference proceedings are available for $25 at: http://www.lime.org/documents/publications/free_downloads/summary-ibls-2005.pdf